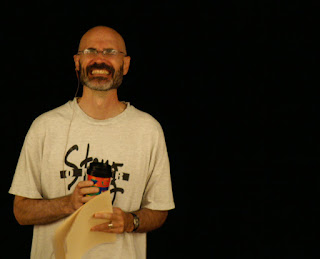 In the 4th grade--this would've been around 1967 or 1968--I recall the horror of committing Robert Frost's "Stopping by Woods on a Snowy Evening." I think it was made all the worst because of the profound reverence my teacher had for Frost, surely tinged by the fact that Frost read at President Kennedy's inauguration, surely tinged by the old, crotchety Puritanism that Frost seemed to draw out in old, old-school teachers.

I think she was angry she could no longer wrap our knuckles and smack our butts, but had to send us to the principal's office for the disciplinary action.

Needless to say, it was a misery. No real discussion of the poem itself, just something compulsory, bloodless.  All other experiences I had through junior high, high school, and college, the act of reciting poetry was colored by that first experience. It felt rehearsed, mechanical, and punitive, against the very nature of poetry being spontaneous.

Now, when I went to graduate school, I was with a number of other poets who held the same suspicion about recitation--mind you, I was the youngest at Indiana, and my colleagues had worse war stories of recitation hell.

Except for one poet, Tyler Fleeson, who then was in his early 30s, already had some chapbooks published, and was the baddest of the bad asses--yes, the wild hair, the fierce blue eyes, the Adonis body, the hard living, and a beaten down station wagon he called "Rhino." No one looked the part better than Tyler. And while he often oozed with self-doubt, Tyler overcompensated by reciting his latest poem. Granted, he wrote short poems, but all the same, he'd have been so involved, so wrought, of building a poem, syllable-by-syllable, that he absorbed the poem.

Needless to say, it was intimidating. Besides, there was a fashion then, or at least in Bloomington among my peers, to avoid being "flashy" with the presentation of the poem. Yes, this was a part of the whole poetry-drone voice thing, but there was a philosophical grounding point to it. Flatness--I'm thinking of Jared Crews or William Stafford or Wendell Berry, yes, a midwestern, plain, plain flatness, a white male flatness--was everything to us. Tyler's work was the great disruptor, but it was also easy to dismiss Tyler for being so damned sincere and exuberant, for his man-boy innocence.

So it's a little odd that for the last 10 years or so, I have required recitation in nearly all my poetry classes, whether in literature or creative writing courses. I get the same resistances I held forty years ago.

This change all came from my involvement in acting. The obvious point: learning lines, yes, requires memorization, but it isn't about memorization, but performing. But here's the kicker, every good actor needs a better director (nothing worse than actors thinking they got in the bag, all on their own).  You need someone outside of you to see what it is that you are doing.  Are you shifting your weight? Why do you place your hand on your hip like that? Where is your intentionality? What are you DOING?  You need those external eyes, ears, and brain to help you see yourself outside of yourself.

Learning lines enables you to rehearse, to build, to discover--the text, then, becomes something of a platform, where you do, where you are active and engaging in choices that you have worked on, shown, and rehearsed.

I love going to poetry readings when it's clear the poet has studied acting, is a good actor. I'm thinking of Lola Haskins, who reads with her full body, who takes such time and care with her delivery. You see her wanting to do something with her audience with her performance.  Beth Ann Fennelly is another poet whose recitations (though she usually holds her book, just to have it in case) are occasions where her poetry becomes something physical through her performance. Saul Williams, of course. Or think of singer-poets, Patti Smith.  Or John Giorno.  Or Marie-Elizabeth Mali.

Obviously, the whole spoken word movement celebrates performance and recitation, going back to Marc Smith, with roots in the Black Arts Movement, the Beat Writers, going back to Dylan Thomas and Edna St. Vincent Millay's radio broadcasts, back to workers' chants and back to call and response, back to Father Walt, oh hell, back to ancient Greek poetry. The beginnings of drama and poetry and ritual, all of this is old, old stuff. It's because poetry, those words, don't reside in the brain--to be accessed mechanically--but are in the breath and heart beat, in the body. Performing a poem, then, requires that bodily engagement.