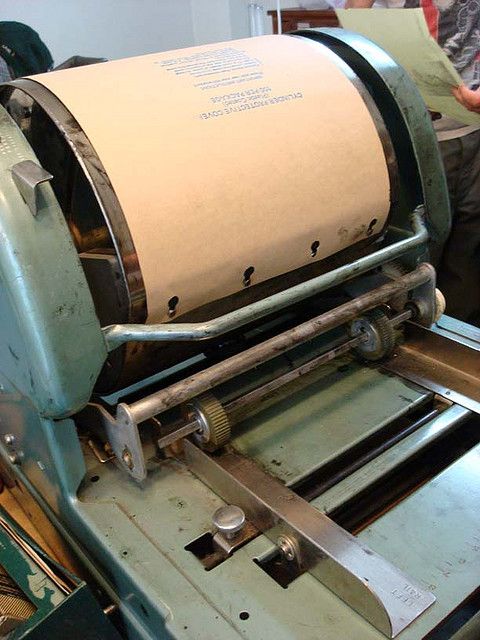 In the mid-70s, I learned how to type on an IBM Selectric II at school, practiced on my father's manual Smith-Corona "Super Sterling" typewriter, and eventually commandeered a bulky Royal typewriter for college.  Perhaps during my junior year, I graduated to an electric Smith Corona, with an erasable tape cartridge.

All of that was at the time I was first writing poetry--all in long-hand in ruled journals, some perfect bound, some spiral bound. But then came that moment of transferring the poem to type, which of course is a part of the writing process.  My high school teacher, Maggie Ward, would bring in several street publications, works mimeographed, looking as if they were produced from my father's typewriter. My own work once typewritten thus "looked" like the real thing, and of course, I began to experiment in the faux-cummings fashion of the 70s, separating words by huge spaces, letting them cascade down like a falls, using all lower-case. It felt so New York, so San Francisco to type poems that way.

Of course, typing meant that if I wanted to reproduce a poem, I would have to reconstruct it word by word, and which is how I reproduced my poems from my college years through my graduate degree (my first computer was a Leading Edge in late 1985, and even then, many magazines wouldn't consider work that was produced on a dot-matrix printer).  My M.F.A. thesis is completely typewritten--I remember it was first rejected by the graduate school because I didn't use heavy enough paper.  The clerk had me touch the back sheet of the paper, where I could feel the indentations of each letter, and she told me that I needed at least 60# paper so that the pages would "feel like a book, not a manuscript." Of course, I loved those unruly bumps on the back of the flimsy paper.

For all our graduate workshops, we reproduced our poems on mimeograph paper, where we would type on carbon paper, go up to the 7th floor of Ballantine Hall at Indiana University, and run off a dozen copies for the class. Feel bad, really bad, for the fiction writers then. Yes, purplish ink, and where you cross out words on a line rather than type out the whole thing again--unless there were just too many errors. That singular mimeograph smell, the damp, warm paper coming out of the machine.

Yes, all a pain in the ass, and yes, it's easy to be nostalgic about all that. Of course, what I eventually loss with the digital revolution was the habit of typing and retyping poems to send out for publication. You would have conversations about how many times could you resend a manuscript. You remember how it angered you to get a manuscript back, all pristine, save for one coffee stain, meaning you had to retype the motherfucker one more time.

Of course, invariably, each retyping meant a new re-entry, a complete opportunity to alter, change, fudge, reconsider, letter by letter, the whole poem and its possibilities. Even if you didn't change a thing, it was a true revision opportunity for the poem. I also enjoyed how it was to re-enter those poems that way, too. Maybe it was the punctuation of the line with the return of the carriage, the clacking of each letter, the meticulous folding the manuscript into thirds to fit into the envelope. That slowness, that luxury, that inefficiency seems so distant now.

And like vinyl records making a comeback, so have manual typewriters; my most hipster students will become jealous when I talk about that clunky old Royal, which I hated, hated, hated. Still, my first compositions are in lined journals and notepads, that old immediate connection between hand and paper. Of course, all of that is remarkable technology as well, so much extraction of resources, so much engineering.