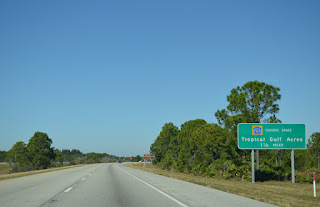 Well-intentioned, yesterday, to make it to Tampa, to spend a night and full day at this year's AWP Conference, but after about 20 miles on the way there, I just said fine, turned off on Tuckers Grade, and came back home.

So many people there I'd be happy to see, want to see, some off-site readings that I know would be kicking, and at heart, I'm genuinely gregarious in those big social settings. But something very old kicked in (I'm not sure if it's old, but it feels that way), where I just shut down, shut out, shut away. Shutterbug.
Maybe I've been to too many large conferences, the attempts to impress, be seen:  too AWiPed-out, too MLAnguished, too PCashed-it-All-in. Too many panels, for sure, though I wasn't going to sit on any. Too many lanyards with conference badges. Too many opportunities to network, to interview, to position.
Admittedly, I've been dispirited by the Florida State Legislature, which opted to weaponize staff at schools, opted to brutally cut arts-grant funding, so I became very tired contacting my representatives and their staff about twice a day for the last couple of weeks. On one hand, the AWP seemed like a reprieve, be amongst thousands of very much my own kind. But on the other hand, as I traveled along north on I-75, full of cars from Ohio and Michigan, zipping at 80 mph, too fast to really notice the saw palmetto, the slash pine, the swallow-tailed kites, all to land at a place where too many friends would be wanting to find a good place to eat and drink, to talk about this or that press, to think of memorials for Lucie Brock-Broido after the memorial for Van K. Brock and the anniversary of his death--me, telling them again, that I am not related, though I have followed their careers throughout my entire career, love their poems dearly.

I often think Florida, at least Southwest Florida, fits me because it is such an end-of-the-road (and not ending at a particularly interesting, colorful place, like Key West). It takes determination, or desperation, to get here, and it takes quite a bit of energy to leave: a place to age out in, to transition into the nursing home, a place that welcomes a white, wealthy flight, a place cheap in infrastructure and expensive with prisons. And so, my mood had gone foul, cynical, and then turning onto 41 back South, I enjoyed the very blue sky, the low humidity, the last hint of winter hanging on, driving back into the sun.